Today I hooked up my computer to my projector and tried something new: doing an entire practice using streaming online programs. I’m used to live class, I’m used to just popping a video in and working with it, but I didn’t quite know what to expect. I’m working on a comprehensive review of Datura Online (and have review access for a month for that), but I wanted to work with the offerings out there to customize my very own practice session, just the way I want it. So here’s what I did:

I scrolled to the “topics” section of Datura Online, selected the “Warmup” option and picked a basic little warmup with some ab exercises for toning; in a second tab, went to “Movement” and then “Shimmies” because I’d seen a basic tutorial on layering 3/4 shimmies onto traveling steps; opened up another tab, pulled up RAQStv and loaded Maria Sokolova’s mini-class from Project Belly Dance so I could get a bit of dancing in; and in a final window, got a quick cool-down with yoga focused on the lower back from Datura. I had everything opened in its own tab, and I organized the tabs in order, so that I wouldn’t have to pause too long between segments.

I’m going to talk about Maria’s lesson in a different post, so I can focus on the Datura offerings here.

To warm you up, Colette has you do slow, deliberate high steps, adding a few arm moves and twists to add a bit of challenge. It’s the kind of thing that looks very easy, but if you’re holding your stomach in as she instructs, becomes more challenging — especially at the end of a long day. 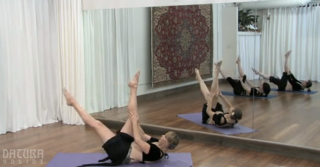 The real goodness is in the ab exercises. I loooved this bit. It’s short and sweet, but involves doing four different kinds of pilates ab exercises. However, instead of repeating each one for a long time and then switching, Colette has you do combination sets — first four slow, controlled reps of each move, then two. There was burn. It targeted the obliques and the lower abs too. Not the kind of thing that will give you washboard abs, but fun to do, and easy to work into a bellydance practice.

This is a standalone section of a longer workshop on the 3/4 shimmy. I was drawn to it because the preview showed Ashley doing a simple, unaccented 3/4 shimmy. This is what I’m learning in one of my live classes, but is pretty different than what I have on most of my videos, and, indeed, from what I’ve learned in other classes.

Surprisingly, Ashley begins by getting you to do a regular shimmy, then try walking with it, then try smoothing it out. At my level, this is a bit easier said than done, and I had trouble figuring out how I was supposed to do that. Then she goes back to basics — phew! — talks about driving the shimmy from the obliques, and does it very slowly. Once the slow shimmy is going, you start walking forwards and backwards with it. And eventually, Ashley has you walk in a large square doing the shimmy at full speed, then try the shimmy on releve. Finally, she does the 3/4 shimmy on the down, and goes through the drills again.

What I liked: Ashley explains and demonstrates why this shimmy is useful. I find it a less exciting shimmy to watch and do than the “hip up hip out” kind of 3/4 shimmy, but her point is that once you get it down, you can accent whatever you like. She has helpful tricks, like clapping on the “1” before you even start lifting your foot. And, she gives pointers on form, as well as occasional tips on what to focus on if you’re just starting. 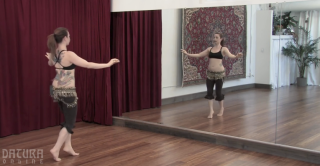 What I still wanted: I think it would be helpful to have an exercise to isolate the obliques in the movement, and the rev up to full speed was too fast for me. (Mind you, since I didn’t watch the entire workshop, I don’t know if she does a slower breakdown elsewhere — but I’m reviewing the videos as I find them.) I think this video would be a great drill for someone who already has a 3/4 shimmy going, but wants to polish her form and work on layering it onto traveling moves.

After I was done with the video, I wound up going to a full-length mirror and just working with the shimmy. I found that moving away from the screen was actually useful, maybe even necessary. Once I took Ashley’s tips but just watched myself, trying to get the form right, I started to see and feel improvement. Eventually, I got faster, and I was even able to walk a few steps with it. So I will most likely return to the video, but after I’ve drilled the shimmy for a bit on my own.

This is a quick way to stretch out and relax your back after a practice. The exercises Rachel chose here are for both the upper and lower back. They resemble some of the moves in my Viniyoga back videos, but with an extra twist or two. Basically, the cool down is composed of slow motion stretches and movements, timed with inhalation and exhalation, and the result is a delicious feeling of relaxation. Simple, sweet, a winner. 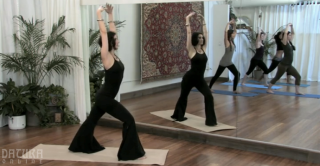 So, it was a good time this evening. It was amazing what could fit into each short segment. The beginning and closing videos were very handy as-is, while the 3/4 shimmy drills needs some, well, preliminary drilling on my part to be do-able. (I will most likely work with the entire workshop for that, so I can get a sense of how Ashley builds up to full speed.)