This is the one hundredth post on Atisheh Dance! Here’s to a “century” of me futzing around my living room in yoga pants and a hip scarf and then writing about it for the internets!

Yesterday I wrote about putting together my own customized dance practice using Datura Online. However, since I’m not a fan of boundaries, I used Datura for the warmup, drills, and cool down, but got my dance in from RAQStv. And namely, from a video I was reeeeeally excited about, Maria Sokolova’s 15-minute lesson from Project Belly Dance.

I actually already worked with this video once while I was on holiday, albeit with minimal warmup, so this was my second time doing it. There is quite a bit of material crammed into this little instructional, so it’s the kind of thing that’s worth repeating — and thankfully, RAQStv has it for a month-long rental.

Maria starts by teaching a basic combination facing the camera, then with her back to the viewer. After repeating it for a bit, she starts to go through each section, showing how to add nuance, contrast, and expression to each movement. It might be a particular twist of the torso, a way of moving the arm through space, a lovely variation on a spin, or the quality of expression during a movement.

I adore Maria’s performance style, this is the video I hoped she would make, and I’m so glad she made it. (And I’m just hoping even more that this is exactly what she does for her eventual Cheeky Girls instructional video, but slower, and more.) I think that for anyone who wonders how to get from the basic moves you do in class to a gorgeous performance — sometimes soft and feminine, sometimes assertive and dramatic — this video shows some of the ways to modify movement. 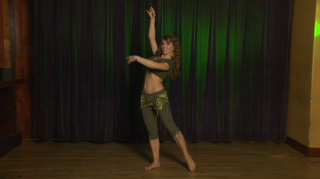 The material is tricky to get on the first time through, which is why it really does bear repeating. The second time I worked with the video, I had already internalized more of the combo, so focusing on the “extras” became easier. And because it is a quick video — it was, after all, the challenge to make a 15-minute instructional — Maria presents some material faster than she probably would in a regular class, especially right at the end. I will definitely do this at least once or twice more so as to learn as much as possible before the rental expires!

My one beef with this video had to do with production: Maria is wearing a green costume, and her background is green curtains! When I projected this, the lack of contrast made it a bit difficult to see her. (It was easier the first time around, when I was working from a large computer screen.) I suspect this is just because Project Belly Dance was being filmed on a time crunch and in the available space, but I still would have preferred a white background.