I bought Viniyoga Therapy for the Upper Back, Neck & Shoulders and its companion for the lower back shortly after having a debilitating back spasm that put me out of commission for several weeks. I went to physiotherapy, and although it did help, I find the exercises excruciatingly boring, which of course means I don’t do them as often as I should. 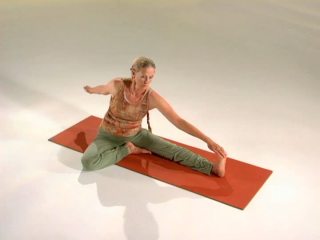 So, what was the result? These DVDs are quite simply a godsend. (I’m only writing a review of this one now because I haven’t yet used all three segments of the lower back DVD.) Kraftsow says in his introduction that doing the yoga exercises should be like brushing your teeth, and I find that the program is designed to make it just as easy to keep the stretching going as brushing teeth would be! Knowing that I have a choice between segments of different lengths, and that I can do just 20 minutes in the morning (before I get too hungry!) and still be doing something for my back, makes it so much more realistic to keep up a yoga program.

That, and the fact that the exercises work. I am sometimes so tense that the neck & shoulders movements don’t relax me completely, but they do help, and I generally feel the difference the following morning: they can be better described as preventing future, worse pain than easing current pain. I might add that several of the exercises are similar to what I learned in physiotherapy, which gave me some confidence in the system.

I spent more on these DVDs than I usually do on exercise videos, but I also use them several times a week, much more than I use anything else. They offer variety in type of exercise and duration of program, and they’re set up so that I can do a light program when I’m suffering from pain and a harder one when I want to build strength. I’ve also noticed a difference in my core abdominal strength from using the two videos. Finally, I should add that the DVDs also include mp3 files of the practices, in case you just want to work out with the sound and don’t need the video any more.